The Great Escape: Health, Wealth, and the Origins of Inequality, by Angus Deaton. Deaton — winner of the 2015 Nobel Memorial Prize in Economic Sciences — offers a thorough and thoughtful history of inequalities in health and wealth. Within the broader analysis lies a wealth of gems: “The familiar concept of gross domestic product (GDP) is a good place to start (though it would be a very poor place to stop).” “In truth there are no experts on what a poor family ‘needs’ — except perhaps the poor family itself.” Much of the press coverage of this book focused on Deaton’s critique of foreign aid, which is interesting (whether you agree with it or not), but it’s a minority of the book.

The Best We Could Do: An Illustrated Memoir, by Thi Bui — In this graphic memoir, a Vietnamese-American woman explores her family history and what it means for her own identity. She traces her parents’ stories during the Vietnam War, her family’s migration to the U.S. when she was a child, and their subsequent life as immigrants. It’s a beautiful and powerful and difficult tale. Abraham Riesman at Vulture: “Narratively intricate, intellectually fastidious, and visually stunning.” Publisher’s Weekly: A “mélange of comedy and tragedy, family love and brokenness.”

The Undoing Project: A Friendship that Changed Our Minds, by Michael Lewis — This is the fascinating story of an exceptional research collaboration that spanned decades, together with the resultant breakthroughs in psychology, with significant spillovers into economics and many other fields. Daniel Kahneman and Amos Tversky were pioneers in rethinking how we should think about how people think. Sunstein & Thaler in the New Yorker: Lewis tells “fascinating stories about intriguing people” and leaves “readers to make their own judgments about what lessons should be learned.” One great quote in the book — from Amos Tversky — points to an attribution problem that raises its head in development work constantly: “It is sometimes easier to make the world a better place than to prove you have made the world a better place.”

Boundless, by Jillian Tamaki — This wonderfully weird collection of short stories in comic format ends mid-word, fittingly. The most original and intriguing graphic work I remember reading. Michael Cavna in the Washington Post: “Organically disorienting, visually jarring — and, sometimes, sublime.” Rachel Cooke in the Guardian: “Fleeting as they are – most [of the stories] can be read in as long as it takes to order and receive a latte – each one is as indelible as it is singular.”

Paperbacks from Hell: The Twisted History of ’70s and ’80s Horror Fiction, by Grady Hendrix with Will Errickson — I don’t read horror fiction. When I was a teenager I read some Stephen King; that’s about it. But the genre experienced a heyday in the 70s and 80s, and Hendrix and Errickson document it in this entertaining cultural history. We stroll through the variety of sub-genres (possessed animals; crazy clowns; haunted houses). Hendrix and Errickson pay special attention to cover art, which is often innovative and just-as-often absurd. While many (or most) of the books he describes sound objectively pretty bad, they still testify to the boundless imagination of the authorial race. For example, here’s a roadmap through horror novels about bad kids: “Why do children act out? They might be nature creatures (Nursery Tale, Strange Seed), possessed by a vengeful spirit (Judgment Day), covering up a murder (The Little Girl Who Lives Down the Lane), or plotting a murder (Harriet Said…). Maybe they’re an ape-human hybrid (The Sendai), getting attacked by snakes (The Accursed), a hammer-wielding hellion (Mama’s Little Girl), capable of raising the dead (The Savior), or juggling a second personality that’s probably a demon (Smart as the Devil).” Below are a few of the covers featured in the book, in case you need more enticement. 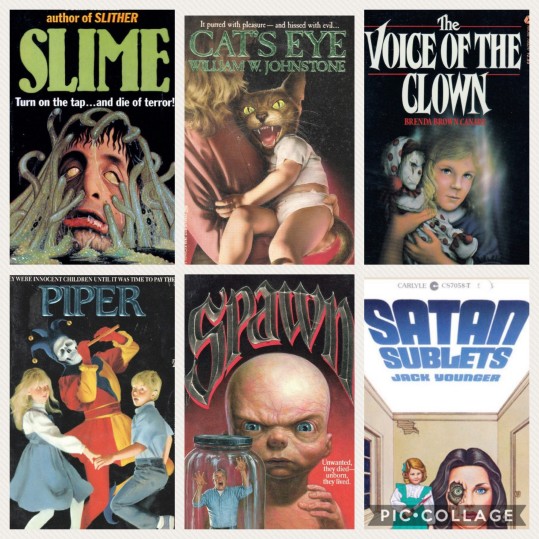 Sourdough, by Robin Sloan — Robin Sloan is back! A few years ago he wrote a delightful debut novel — Mr. Penumbra’s 24-Hour Bookstore — and I’ve been excited to get to this, his new novel. Jason Sheehan at NPR put it well: “Robin Sloan’s new novel, Sourdough, is exactly like his first book, Mr. Penumbra’s 24-Hour Bookstore, except that it’s not about books (exactly), but is absolutely about San Francisco, geeks, nerds, coders, secret societies, bizarrely low-impact conspiracies that solely concern single-noun obsessives (food, in this case, rather than books), and also robots. And books, too, actually, now that I think about it.” It also involves a magical sourdough starter and warring colonies of microbes. It’s great fun.

Baking Cakes in Kigali, by Gaile Parkin — Angel Tungaraza is a Tanzanian woman who has moved to Rwanda with her family and started a cake-baking business. She meets lots of interesting people and has interesting conversations with them. The novel is reminiscent of The No. 1 Ladies’ Detective Agency in that it tries to say something about current issues while not really focusing on plot and not having any serious conflict. The World Bank and the IMF both appear, with unflattering characterizations. And one exchange about the source of motivation for development workers inspired one of my recent blog posts: “Perhaps these big organisations needed to pay big salaries if they wanted to attract the right kind of people; but Sophie had said that they were the wrong kind of people if they would not do the work for less. Ultimately they had concluded that the desire to make the world a better place was not something that belonged in a person’s pocket. No, it belonged in a person’s heart.”

Never Let You Go, by Chevy Stevens — Thriller! Set in British Columbia! About a women, her daughter, and her recently-released-from-prison abusive ex-husband. Exciting! I did not predict the ending.
Fangirl, by Rainbow Rowell — Lovely coming-of-age story about an avid

fan fiction author Cather over the course of her first year in college. I loved her writing professor and wish we’d seen more of her. I’ve never read any fan fiction (except a couple of pages of 50 Shades of Grey — which originated as Twilight fan fiction — over someone’s shoulder on the metro), but Cather’s sentiments are deeply relatable: “Maybe you think I’m a little crazy, but I only ever let people see the tip of my crazy iceberg. Underneath this veneer of slightly crazy and socially inept, I’m a complete disaster.”
Kids’ Stuff

Hilo Book 4: Waking the Monsters, by Judd Winick — Girl’s mom wants her to be a cheerleader; she wants to be a ninja wizard instead. Robots! Aliens! So much awesomeness! Can’t wait for book 5! I love reading these with my kids.