In a 1916 story entitled “Enoch Soames,” Max Beerbohm recounts the tale of a hack poet (Soames) who frets to his friend (Beerbohm) about his inability to enjoy the fame that will assuredly accrue to him posthumously. If only he could step into the Reading Room of the British Museum one hundred years hence: “Think of the pages and pages in the catalogue: ‘Soames, Enoch’ endlessly.”

Of course, the devil happens to be sitting at the next table and offers Soames the chance to do just that in exchange for his soul. Soames zooms to the Reading Room a century ahead. He checks for himself in the card catalogue. Nothing. He checks a few encyclopedias. Nothing. Finally, he finds a book on “English Literature: 1990-2000.” There he finds himself in the following passage: “For example, a writer of the time, Max Beerbohm, who was still alive in the twentieth century, wrote a story in which he portrayed an imaginary character called ‘Enoch Soames’ — a third-rate poet who believes himself a great genius.” History hasn’t forgotten Soames; it fictionalized him.

This fear for our legacy recurs: Just yesterday I saw an episode of the Dick Van Dyke show that aired in 1963, where the title character — a TV comedy writer — laments, “All I write are jokes. Nothing I write has any real permanence about it. [It is said] on the television once and it’s gone forever.”

Maybe this desire to be remembered is all overblown. Perhaps the late great detective novelist, Robert B. Parker, had it right. When asked how his books would be viewed in 50 years, he replied, “Don’t know, don’t care.”

But in the present he brought great pleasure to many. 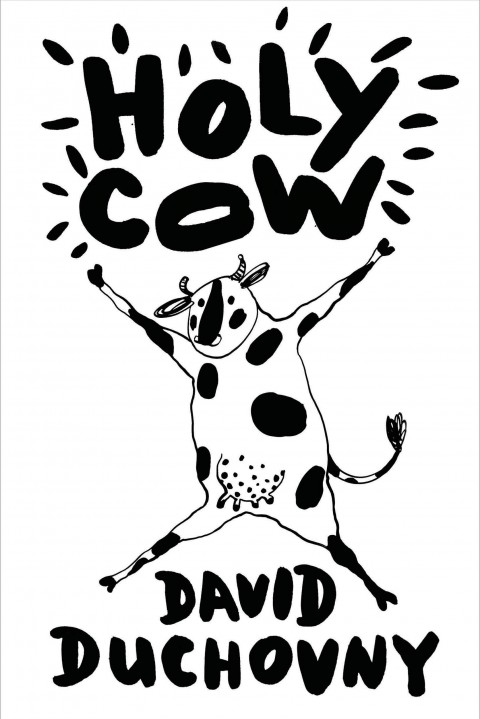 If that sounds like the opening of a joke, that’s because it is! David Duchovny’s first novel, Holy Cow, is a fun, silly romp. I laughed aloud more than once, but not continuously.
In short, a farm cow looks into the family room of the farmer’s home and sees a TV program showing her bloody fate. But she also sees that there’s a land where cows are revered: India. She seeks to get there, along with a pig who wants to go to Israel and a turkey who wants to get to Turkey. As you can imagine, mayhem ensues.
Who is this book aimed at? No idea. If it were a movie, it would be a PG-13 for language, and despite the anthropomorphized animals, most of the humor is over the heads of smaller children. But I enjoyed it.
A few tidbits:
On global warming: “Stop blaming me and my gas for global warming. I can’t drive a car.”
On selfies: “Selfies they call ’em, and that makes sense ’cause even though they’re sending these pictures to others, it still smells like selfish to me. Is that why they call it an ‘I phone’?”
On TV: “I realized that the Box God is not just one god, but many gods in one box. … It seemed that everyone in the family wanted to worship different gods. The youngest girl wanted to worship the Nickelodeon God, the dad wanted to worship the ESPN God…while the mom was happy with this Discovery God. Mom won out. Everybody else…left the room grumbling, and I realized that all humans must have a Box God in their own rooms. … What a strange god that instead of bringing people together, divides them.”
On plane behavior: “None of the flight attendants gave us any trouble, ’cause everyone acts like an animal on a plane.”
It was light and entertaining and occasionally a little bit thoughtful.
POSITIVE
Kirkus – “a charming fable about dignity and tolerance, complete with anthropomorphized animals and replete with puns, double-entendres, and sophisticated humor” https://www.kirkusreviews.com/book-reviews/david-duchovny/holy-cow-duchovny/
Denver Post – “a seriously entertaining fable that doesn’t take itself too seriously.” http://www.denverpost.com/2015/02/12/book-review-holy-cow-by-david-duchovny/
The Guardian – “although Elsie’s “memoir” feels slight, and reads too often like a funny first draft of something more substantial, it does what all good animal novels do – it makes us think about our relationship with the other species we share the planet with.” https://www.theguardian.com/books/2015/feb/04/holy-cow-david-duchovny-review
MIXED
HuffPost – “the book seems to have no real idea who its audience is or what it’s actually about…The sheer absurdity of this roller coaster of a book makes for some knee-slapping moments, however.” http://m.huffpost.com/us/entry/6598702.html
NEGATIVE
“Holy Cow is one of the most half-baked, phoned-in books I’ve ever read, and it’s hard to look at it as anything but a vanity project.” http://www.npr.org/2015/02/07/383875612/dont-have-a-cow-man

“Spaghetti Surprise was a simple equation for indigestion, invented by Mom: Noodles tossed like a blond wig over all your leftovers.  Noodles as a culinary disguise for gross, inedible root vegetables: surprise!  In a trash can this dish was raccoon kryptonite; even Grandpa couldn’t finish it.” (Karen Russell, Swamplandia!, p117-118)

Tina Fey provides a comical memoir of growing up, going to school, getting involved in comedy through Second City (a comedy troupe in Chicago), her time on Saturday Night Live, 30 Rock, and then being a mom. I especially enjoyed her narrative of getting on SNL, battling sexism in comedy, and starting up 30 Rock. (I always enjoy these behind-the-scenes looks at programs I enjoy, and this is very good example.) Other parts, like her commentary on being a mom, was less exciting, although even there, the description of the breast milk militants was very funny.

As a narrator, she reads the book wonderfully. Note on content: There is strong language strewn throughout and some sexual humor, so it won’t be for everyone.

Seven out of ten!

I don’t know why, but I’m always very careless when I go on a trip, about the address or telephone number or anything of the people who invited me. I figure I’ll be met, or somebody else will know where we’re going; it’ll get straightened out somehow.

One time, in 1957, I went to a gravity conference at the University of North Carolina. I was supposed to be an expert in a different field who looks at gravity.

I landed at the airport a day late for the conference (I couldn’t make it the first day), and I went out to where the taxis were. I said to the dispatcher, “I’d like to go to the University of North Carolina.”

Needless to say, I hadn’t the slightest idea. “Where are they?” I asked, figuring that one must be near the other.

I had nothing with me that showed which one it was, and there was nobody else going to the conference a day late like I was.

That gave me an idea. “Listen,” I said to the dispatcher. “The main meeting began yesterday, so there were a whole lot of guys going to the meeting who must have come through here yesterday. Let me describe them to you: They would have their heads kind of in the air, and they would be talking to each other, not paying attention to where they were going, saying things to each other, like ‘G-mu-nu. G-mu-nu.’”

His face lit up. “Ah, yes,” he said. “You mean Chapel Hill!” He called the next taxi waiting in line. “Take this man to the university at Chapel Hill.”

“Thank you,” I said, and I went to the conference.

I read some science fiction and fantasy, but one thing that drives me CRAZY is when the characters have these Totally Absurd Names.  I had to put down the Dune audiobook for just that reason.  (I know, Dune!)

The movie Gentlemen Broncos, which is almost completely unfunny, has this funny riff on just that.