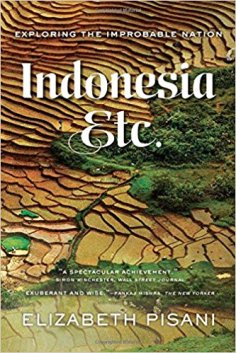 Indonesia is the fourth most populated nation in the world, and it’s the fifteenth largest in land area. More than 700 languages are spoken there. It has the largest Muslim population the world, ahead of India and Pakistan. And yet, until now, I know almost nothing about it. Elizabeth Pisani’s recent book — Indonesia, Etc.: Exploring the Improbable Nation — helped to close that gap. Pisani has written an entertaining mix of travelogue, history, and current affairs. Years ago, Pisani worked in Indonesia as a journalist and then later returned as an epidemiologist. Most recently, she spent a year traveling between Jakarta to remote villages across Indonesia’s jungles and coasts. In this book, she brings it all together. It reminds me of the book I might write if I were traveling around Indonesia and sending weekly emails home to friends. The history and the current affairs are mixed in with funny anecdotes and observations, with the result being a not-too-structured approach. But in addition to all the enjoyable, colorful anecdotes, I definitely learned about the history, for example, about early colonization by the Dutch and major differences between the first two presidents, Sukarno and Suharto.
Pisani writes in a deeply familiar and affectionate tone, but I never felt that she condescended. To give you a sense, here is a line on Sukarno, who was “a demagogue whose political recipe was one part populism and three parts theatre, seasoned with mischief and served with a large glass of charisma” and “always better at vision than delivery.” Later, she talks about Indonesia poor showing in international student assessments: “The dismal results are a result of dismal teaching, and that is in turn the result of patronage. A teaching job is the easiest way to squeeze into the coveted beige uniform of the civil servant; local politicians give jobs in schools to their political supporters all the time. That means the schools are rammed with people whose goal is to be a bureaucrat, not an educator. And they behave just other bureaucrats in Indonesia: they see working hours as a movable feast and take time off more or less at will.” And later, students describe the challenge of being taught in English: “The teachers, they cannot speak English too.”
In some accounts, the researcher seeks to be an invisible observer. Pisani doesn’t hide her role as participant, always discussing her interactions with the people around her and often reflecting on people’s perceptions of her: “The possibilities for a short-haired white woman with a face battered by months of boat travel, dressed in long-sleeved cottons, sensible shoes and a black photographer’s waistcoat, a woman who spoke with a Jakarta accent and was always scribbling in a notebook were: in Sumba, a researcher on a malaria study; in Tanimbar and Kei, an anthropologist. In Flores, a nun (!) When I got over to post-tsunami, pre-ballot Aceh, I was either an aid worker or an election monitor. In Kalimantan, I must be from an environmental NGO. In the smaller regions of Indonesia, an English teacher. Here in Weda they assumed I was an engineer.”
For those of us who know little about this giant of a nation, Pisani provides a deeply accessible introduction. I listened to and enjoyed the unabridged audiobook, narrated by Jan Cramer.
I looked at 8 other reviews (below), and only the New York Times comes away with a negative take on the book.

1 thought on “a breezy, entertaining journey through Indonesia – a review of Pisani’s book Indonesia, Etc.”