Don’t Call Us Dead, by Danez Smith — I compiled ten lists of the “best poetry collections of 2017,” and this was the most commonly recommended, on five of the lists. With good reason. Smith writes tragic, beautiful poems about black men killed by the police, living black and gay, being HIV+, and more. I highly recommend this collection.
i spent my life arguing how i mattered
until it didn’t matter.
who knew my haven
would be my coffin?
dead is the safest i’ve ever been.
i’ve never been so alive.

Absurdistan, by Gary Shteyngart — In this all satirical / all the time novel, Misha Vainberg, a Russian who studied “multicultural studies” at Accidental College in the US, can’t get a visa back to the States after his father killed a businessman from Oklahoma. So he travels to former Soviet republic Absurdistan in hopes of making his way to Europe. Mayhem ensues, big time. The book had many funny parts, but I never fell in love with it. (Also, too much obesity-based humor for my taste.) Particularly amusing to me was Misha’s charitable foundation (“Misha’s Children”) which sounded like all too many sort of well-meaning foundations established on the whimsical ideas of their benefactors’ sense of what it means to do good in the world. Walter Kirn of the New York Times writes: “This novel is so immodestly vigorous, so burstingly sure of its barbaric excellence, that simply by breathing, sweating and standing upright it exalts itself.” Nothing is sacred in Shteyngart’s world: here’s an absurd scene in which Misha proposes a “Holocaust for Kidz” exhibit:
Through the magic of Animatronics, Claymation, and Jurassic technology, the inane ramblings of underqualified American Hebrew day school teachers on the subject of the Holocaust will be condensed into a concise forty-minute bloodbath. Young participants will leave feeling alienated and profoundly depressed, feelings that will be partly redeemed and partly thwarted by the ice-cream truck awaiting them at the end of the exhibit.

Harry Potter and the Sorcerer’s Stone, by JK Rowling — I was reading this to my daughter, and I realized that Harry is ultimately unnecessary in the climax of this book. (Super spoiler alert!) After Harry has retrieved the sorcerer’s stone, so Quirrell / Voldermort weren’t able to get it, Harry asks Dumbledore how he was able to get the stone when Q/V couldn’t. Dumbledore says, “Ah, now, I’m glad you asked me that. It was one of my more brilliant ideas, and between you and me, that’s saying something. You see, only one who wanted to find the Stone — find it, but not use it — would be able to get it.” So Q/V wouldn’t have been able to retrieve the stone even if Harry hadn’t been there. [Sad trombone.] My daughter argues that it was just training for the future; possible. I’m reminded of the episode of The Big Bang Theory in which Amy demonstrates that Indiana Jones is totally unnecessary to Raiders of the Lost Ark.

Beverly, by Nick Drnaso — Before Drnaso wrote Sabrina, the first graphic novel ever longlisted for the Man Booker Prize, he wrote Beverly. It’s a collection of interconnected graphic short stories — graphic is in “graphic novel”) — that paints a dark, sad portrait of youth in America. Kids’ dark visions spill out onto the page; parents and children communicate and don’t at the same time. It’s a quick, worthwhile read. Janet Potter writes for the Chicago Reader that “Drnaso’s stories and characters, and perhaps his view of the world, are like that—difficult to watch, achingly realistic, and all too familiar.” Dan Kois writes for Slate that “Drnaso’s stories are full of moments in which the bubbling reservoir of anxiety or feeling or darkness boils to the surface. I read it in big enthusiastic gulps, then felt a little sick to my stomach afterward.”

All the Answers, by Michael Kupperman — What’s the legacy of a child celebrity? During World War II, Joel Kupperman was a regular on the radio show — and later, the TV show — Quiz Kids. In this graphic memoir, Kupperman’s son tries to understand how being a child celebrity ruined his father. Useful insights into how child stars are exploited for the purposes of others. On Vulture’s June list of the best comics of 2018 so far. 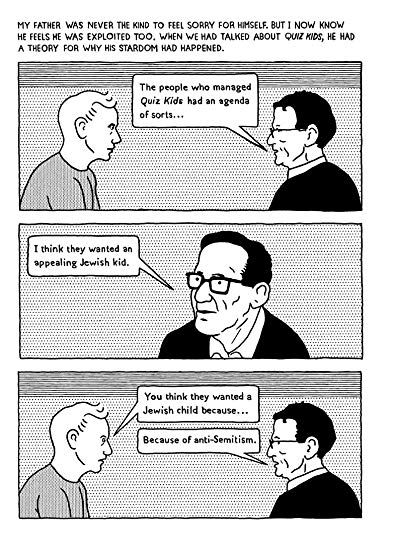