What It Means When a Man Falls from the Sky, by Lesley Nneka Arimah — A breathtaking collection of stories. The prose is beautiful; it made other books I read or listened to at the same time seem pedestrian. Some of the stories are realistic, others incorporate magical realism. Some take place in Nigeria, others in the U.S., other in both. I’d read a novel by Arimah on any of these stories. One woman observes about her boyfriend: “He didn’t seem to mind how joy had become a finite meal she begrudged seeing anyone but herself consume.” Or a father comments on his daughter: “He should chastise the girl, he knows that, but she is his brightest ember and he would not have her dimmed.” As Marina Warner wrote in the New York Times, “It would be wrong not to hail Arimah’s exhilarating originality: She is conducting adventures in narrative on her own terms, keeping her streak of light, that bright ember, burning fiercely, undimmed.”

Economism: Bad Economics and the Rise of Inequality, by James Kwak — Kwak walks through how a number of simplistic economic models break down in the face of empirical evidence — e.g., the minimum wage, health care markets, the pay of chief executives — and yet a religious adherence to these Economics 101 models often serves to advance the interests of the rich. This is what he calls economism, a “misleading caricature of economic knowledge.” Martin Sandbu wrote in the Financial Times, “Kwak’s book is didactic in the best possible way, and it proves beyond doubt how dangerous a little knowledge can be.” Not an indictment of economics but rather of its misuses.

Taduno’s Song, by Odafe Atogun — A music superstar – Taduno – who has used his music against a Nigerian dictator returns home after a few months in exile to find that no one remembers him. He has to unravel the mystery and seek to rescue his girlfriend, who has been kidnapped by government forces. Of the premise, one character said, “It all sounds so complicated and strange.” Yes, but also beautiful. The simplicity of Atogun’s prose let me read almost the entire book on one long flight (Addis Ababa – Washington, DC). Taduno reminds us, “When music is silent you hear the laughter of the tyrant.” As George Shankar wrote in the FT, Atogun’s “simple prose lends the narrative a gentle urgency… A powerful, lingering fable.”

Browse: The World in Bookshops, edited by Henry Hitchings — I love bookshops, and I’ve enjoyed exploring the offerings from open market book stalls in Dar es Salaam to a piled-high dolly of books on the sidewalk in Addis Ababa, to proper brick-and-morter bookshops in Rio de Janeiro, Kigali, and Mexico City. In this delightful, creative collection, authors from India, China, Turkey, Colombia, Kenya, the U.K., Denmark, Italy, Germany, the Ukraine, and the U.S. reflect on the role of bookshops — used and new — in their lives. In his essay on bookshops in Bogotá, Colombia, Juan Gabriel Vasquez writes “A good bookshop is a place we go into looking for a book and come out of with one we didn’t know existed. That’s how the literary conversation gets widened and that’s how we push the frontiers of our experience, rebelling against its limits.” This reminds me of sociologist James Evans’s work on how the shift to electronic journals led to a narrowing of citations: “By drawing researchers through unrelated articles, print browsing and perusal may have facilitated broader comparisons and led researchers into the past.”

Binti, by Nnedi Okorafor — Binti leaves her home in Nigeria to attend a university across the galaxy, where only 5 percent of the students are human. (It’s a nice corrective to the Star Trek universe, where humans remain remarkably dominant.) On the way, her ship is attacked, and Binti must try to save her life. Okorafor creates cultures and worlds that deeply value knowledge. (In her book Akata Witch, students who learn new magic are rewarded with currency raining down on them.) In Binti’s tribe, some are born with the “gift of mathematical sight”: and Binti uses equations to calm herself (“my mind cleared as the equations flew through it”) and to wield power. This fast-paced, 90-page novella is a quick, easy introduction to a great contemporary writer of science fiction and fantasy.

My Favorite Thing Is Monsters – Volume 1, by Emil Ferris — The protagonist of My Favorite Thing Is Monsters would rather imagine herself a monster than admit certain truths about herself. Growing up in Chicago in the 1970s (??), she escapes into horror comics and tries to solve the mystery of her neighbor’s demise. But that description doesn’t do it justice. I found this book kind of astonishing — the depth of adolescent feeling, the sprawling art, at times pulpy and at other times subdued, the exciting story. I can’t wait for Volume 2. (The author’s story is as compelling as the book. Dana Jennings tells it well in the New York Times.)

I Am Malala: The Girl Who Stood Up for Education and Was Shot by the Taliban, by Malala Yousafzai with Christina Lamb — Many people know that Malala Yousafzai is an education activist, shot by the Taliban, and eventual winner of the Nobel Peace Prize. This compelling memoir gives an example of passionate activism at great personal sacrifice, at the same time demonstrating the uncertainty and fear around living in an area suffused with violence. “One child, one teacher, one book and one pen can change the world.” This is the kind of book that makes you ask, “What have I been doing with my life?” in the best of ways.

Hostage, by Guy Delisle (translated by Helge Dascher) — In 1997, Christophe Andre was kidnapped from the Doctors Without Borders office where he was working in Russia. He was held for ransom, and Delisle tells his story through this taut graphic novel, which is excruciating in the best way, as we follow the Andre’s thoughts and his efforts to escape. “What gives ‘Hostage’ its most resonant power is not the rush of action but rather the attention to minute detail over the hundreds of pages of relative inaction” (Michael Cavna). I also really enjoyed Delisle’s graphic memoir of his time living in Pyongyang, North Korea.

African Kaiser: General Paul von Lettow-Vorbeck and the Great War in Africa, 1914-1918, by Robert Gaudi — I knew little of World War I in Africa, and I still feel like I know little. The book relies heavily on accounts from British soldier Richard Meinertzhagen, who seems to have fabricated many of his tales. These tales are included here, with the justification being that they “have the ring of truth.” Separately, the heavy Eurocentrism seems out of place for a book published in 2017: I can count the named Africans in the book on one hand (maybe a six-fingered hand, like Count Rugen in The Princess Bride). And I have little patience for a book with lines like “Tom von Prince, more savage than the savages he fought…” I did enjoy learning about how the Germans and the British would read each other’s captured fiction: “Von Lettow and the Germans, however, were disappointed in the quality of the literature they captured from their enemies from time to time during the war — most cheap detective fiction from the English.” Michael Dirda of the Washington Post loved this book; Allan Mallinson in the Spectator not so much: “Gaudi’s book is so error-strewn that it would fail to qualify even as historical fiction.”

The Maze Runner, by James Dashner — Kids trapped in an artificial environment, battling to survive. Pedestrian prose, and I feel no compulsion to find out what happens next. (Maybe one of my kids will tell me.) I feel like I’d have really liked this if it had been written with a strong female protagonist, preferably with archery skills. (I loved The Hunger Games — the whole series, but especially the first book.)
Kids’ stuff

Brave, by Svetlana Chmakova — This graphic novel is a wonderful treatment of bullying (even among “friends”). It’s technically a sequel to Chmakova’s Awkward (which I wrote about last month and also loved) but it can be read as a stand-alone.
Lastly, here are images from two of the three graphic works that I read this month.
Best Valentine’s Day cards ever, from Emil Ferris’s My Favorite Thing Is Monsters 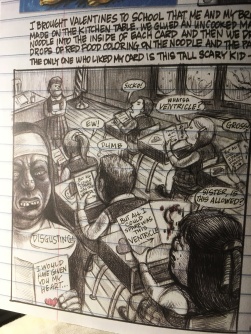 2 thoughts on “What I’ve been reading this month”