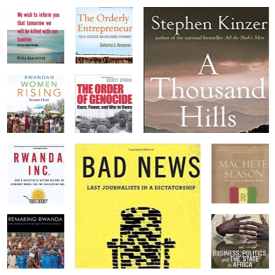 Rwanda is an exciting country with a tragic history. Before a recent work trip there, I asked the Twitterverse for book recommendations about the land of a thousand hills. Here is what I heard back, along with a few of my own. (Asterisks are on the ones I’ve actually read.)

1 thought on “What books to read on Rwanda?”