Almost ten years ago, I was working at the RAND Corporation, and I received an offer from the World Bank to be a consultant evaluating education programs around Sub-Saharan Africa. I was torn: I had a great job at RAND, and I lived in paradise (a.k.a Santa Monica, California). But I wanted to focus my research fully on international development, which would be easier at the World Bank, and the consultancy seemed really exciting.
As I was mulling it over, I heard this finding in Dan Gilbert’s book Stumbling on Happiness: “In the long run, people of every age and in every walk of life seem to regret not having done things much more than they regret things they did.” That significantly contributed to my decision to make the move, and I’ve really enjoyed what I’ve been able to do so far at the World Bank.
Of course, it’s tough to interpret the findings Gilbert is reporting causally: It could be that the kinds of people who are more likely to make changes are happier people. This summer University of Chicago economist Steven Levitt put out a paper that adds some causal evidence to this:
This paper reports on a large-scale randomized field experiment in which research subjects having difficulty making a decision flipped a coin to help determine their choice. For important decisions (e.g. quitting a job or ending a relationship), those who make a change (regardless of the outcome of the coin toss) report being substantially happier two months and six months later…. To assess causality, I use the outcome of a coin toss. Individuals who are told by the coin toss to make a change are much more likely to make a change and are happier six months later than those who were told by the coin to maintain the status quo. The results of this paper suggest that people may be excessively cautious when facing life-changing choices.
A comic that I saw today from xkcd provides a little more anecdotal support: 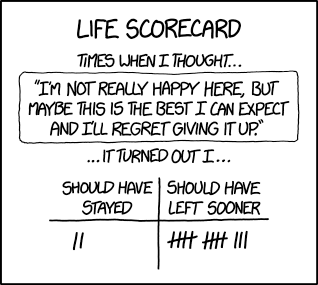 I thought of Levitt’s paper as I listened to Neil Gaiman’s fantasy novel American Gods recently. Shadow, the protagonist, agrees to work for an unknown but persistent employer — Wednesday — based on a coin toss:
Shadow took a quarter from his pocket, tails up. He flick it up in the air, knocking it against his finger as it left his left hand to give it a wobble that made it look as if it were turning, caught it, slapped it down on the back of his hand.
“Call,” he said.
“Why?” asked Wednesday.
“I don’t want to work to work with anyone with worse luck than me. Call.”
In the short run, Shadow takes the job and his life erupts into chaos and (spoiler alert!) death — but that’s not the half of it, so I partially retract the spoiler alert. But my best guess at the counterfactual (what would have happened if Shadow hasn’t taken the job) is that his life would have been the worse for it.
So the takeaway from psychology, economics, fantasy, and the funnies is that if you’re having trouble deciding whether to make a change, maybe that means you should. Or you could just flip a coin.
Bonus reading: You can read about the evaluations I did in those early World Bank days in the Gambia, Sierra Leone, and Tanzania, or about the work that I was doing on cost-effectiveness of education interventions and higher education in Korea while at RAND.

1 thought on “Psychology, economics, fantasy, and the funnies all agree about making life choices”