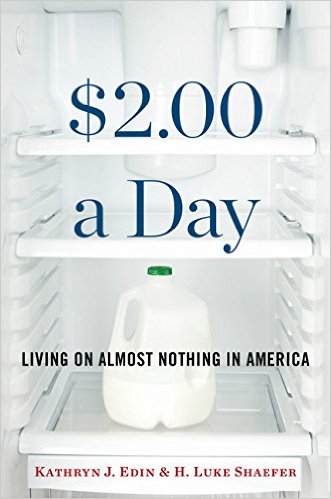 a review of Kathryn J. Edin and H. Luke Shaefer’s $2.00 a Day: Living on Almost Nothing in America

“1.5 million households with roughly 3 million children were surviving on cash incomes of no more than $2 per person, per day in any given month” as of 2011. In $2.00 a Day: Living on Almost Nothing in America, Kathryn Edin and Luke Shaefer compellingly demonstrate how families in extreme poverty in the U.S. survive. They use survey data to characterize the magnitude of the problem, then they follow a wide range of families over time to see how they got where they are and how they are getting by. They provide a quick review of the policies that brought us here (with the extreme poor increasing 4 percent over 15 years), as well as ideas for policies to give families a hand up.
One truth comes through in each family’s story: Every parent here would far prefer a steady job over a welfare payment. But guess what? There aren’t enough jobs at the bottom of the ladder, and the jobs that exist are terrible. As Jared Bernstein writes in his review of the book, “I cannot overemphasize the importance of this fundamental flaw in poverty policy, i.e., the assumption that there is an ample supply of perfectly good jobs out there that poor people could tap if they just wanted to do so.” One woman applied for over 100 jobs before getting a terrible one with irregular hours that ultimately caused enough health problems (from working in unheated spaces in Chicago winters) that she lost almost all of her hours. She is not the exception; story after story confirms her experience. (Anecdote plus anecdote plus anecdote eventually add up to data.)
Even when you include various non-cash benefit programs, the number of extremely poor is far too high, as the Huffington Post figure below shows. And part of what Edin and Shaefer demonstrate in the lives of the families they profile is how difficult it is to survive in the United States without cash: How do you ride the bus for a job interview? How do you obtain appropriate clothing to apply for jobs? 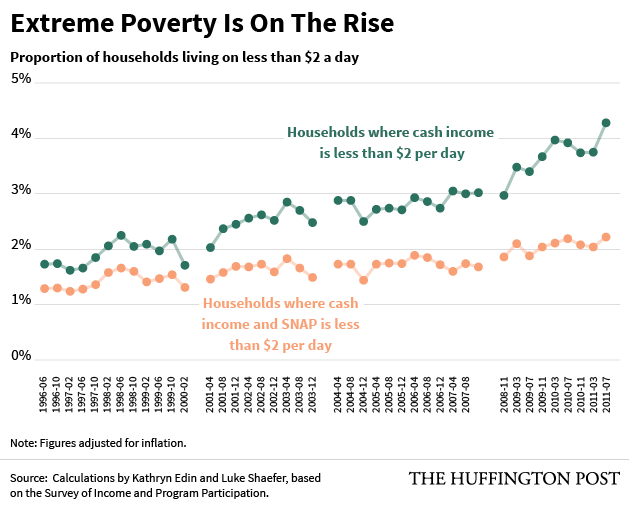 This book is eye-opening and important. As Bernstein writes, “Doing nothing should not be an option.” And Edin and Shaefer don’t recommend a return to cash welfare. Every person they interview wants a job, so they want the government to help create those, via workfare and public-private partnerships. Regardless of whether you agree with that solution, read this book. I hope that it becomes part of our national conversation. Every other review I’ve encountered agrees, from the New York Times and the Los Angeles Times to the Boston Globe, Kirkus, and Publishers Weekly. Jonathan Cohn has an insightful interview with one of the authors in the Huffington Post.
I listened to the unabridged audiobook. It was well narrated by Allyson Johnson.
Excerpts from other reviews
William Julius Wilson, New York Times: “This essential book is a call to action, and one hopes it will [arouse] both the nation’s consciousness and conscience about the plight of a growing number of invisible citizens. The rise of such absolute poverty since the passage of welfare reform belies all the categorical talk about opportunity and the American dream.”
Stephanie Mencimer, Mother Jones: “$2.00 a Day is an intimate chronicle of the ‘cashless economy'”.
Julia Klein, Los Angeles Times: “History and analysis aside, what will likely remain with readers of ‘$2.00 a Day’ are its indelible pseudonymous portraits of families struggling to survive.”
Nick Romeo, Boston Globe: “Edin and Shaefer’s book is an important exposé on what they describe as ‘a poverty so deep that most Americans don’t believe it even exists.'”
Kirkus Reviews: “The authors share deeply human stories of the regular people trapped in poverty, typically through no fault of their own. Some are victims of abuse, others are forced to quit their low-paying jobs due to health concerns, and some simply cannot catch a break despite playing by the rules. An eye-opening account of the lives ensnared in the new poverty cycle.”
Jared Bernstein, Atlantic Monthly: “Given the lives to which Edin and Shaefer have introduced us, doing nothing should not be an option.”
Publishers Weekly: “This slim, searing look at extreme poverty deftly mixes policy research and heartrending narratives from a swath of the 1.5 million American households eking out an existence on cash incomes of $2 per person per day.”

1 thought on “do you think living on under $2 a day is only a problem of developing countries? think again.”