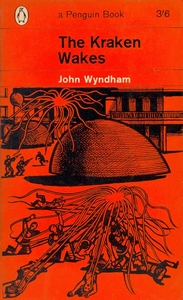 A review of John Wyndham’s The Kraken Wakes
“It doesn’t look like an interplanetary war to me.” So speaks a member of the media when the central scientist suggests that what is happening is an alien attack. What’s happening? Metal balls are falling from the sky into the ocean deeps. When ships investigate, they disappear. The scientist attributes the inability to see what is happening as an alien attack to H.G. Wells’s War of the Worlds, explaining how one fictional representation can crowd out others: “One of the troubles about writing a classic is that it sets a pattern of thinking. Everybody reads it, with the result that everybody thinks he knows exactly the form which an interplanetary invasion not only ought to, but must, take.”
Of course, one representation crowding out others isn’t unique to alien attacks. It’s the same phenomenon that makes it difficult for me to imagine Hermione Granger as anyone other than actress Emma Watson, and the reason many of us might be surprised when we make it to the afterlife. It’s a version of what psychologists call anchoring.
John Wyndham’s 1953 novel — The Kraken Wakes — is an apocalyptic novel in which aliens invade from the seas. It has a number of interesting ideas, like those above, but it suffers from poor pacing and a lack of firsthand action. Towards the end, one character remarks: “I know it isn’t finished; it’s just going on and on and on.” I didn’t want to, but I agreed.
Other Reviews
Positive
Mixed