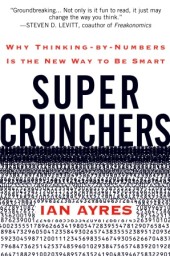 Every time I see an audiobook of an economics book, I feel kind of obligated.  Here are my thoughts on this one:

Ayres demonstrates how statistical analysis of large datasets is affecting the way the world works in a broad range of applications: credit card companies, sports teams, wine critics, development economists, medical practitioners,* law enforcement agencies, schools, etc. “Freakonomics didn’t talk much about the extent to which quantitative analysis is impacting real-world decisions. In contrast, this book is about just that – the impact of number crunching” (p13).

As an economist, some of the work is familiar (for example, the research Ayres and Steve Levitt did on the value of the vehicle-recovery device LoJack or the Poverty Action Lab), but Ayres gives a good introduction for the uninitiated. And he covers such a broad range of applications that I learned a great deal.

Like other research surveys (Freakonomics, The Tipping Point, Blink, Stumbling on Happiness), I view these books mostly as surveys of interesting research. Each has a central thesis (Ayres’ is that traditional intuition and expertise will be – or already has been – replaced by computing power and will have to learn to complement that power rather than compete with it) which may or may not be convincing, but the books tend to be good rides because so much of the surveyed research is interesting. (For example, I’ll be studying more about Direct Instruction – a scripted way of teaching reading that may be useful in my own work – based on this book; and the model Ayres expounds of how private firms learn from iterative experimental trials may apply well to some of the agencies I engage.)

As far as Ayres’ thesis goes, I find him relatively convincing (computers with lots of data do predict many things better than people**) but despite his many caveats, the tone should probably have been more humble. He doesn’t – for example – explore the issues brought by Taleb in The Black Swan: The Impact of the Highly Improbable, how traditional statistics may be worse than useless in financial markets where a single, completely unpredictable bad shock can wipe out years of carefully predicted investments.

This book was lots of fun to listen to, not least (unintentionally) because Ayres loves giving irrelevant but amusing descriptions of his researchers. The examples below are all economists:

“Ashenfelter is a tall man with a bushy mane of white hair and a booming, friendly voice… No milquetoast he” (p2).

“Even now, in his forties, Larry [Katz] still looks more like a wiry teenage than a chaired Harvard professor (which he actually is)” (p65).

And of course you know this is the Freakonomics family because of the Levitt-love scattered here and there: “There is a new breed of innovative Super Crunchers – people like Steve Levitt – who toggle between their intuitions and number crunching to see farther than either intuitivists or gearheads ever could before” (p17).

I listened the unabridged audiobook narrated by Michael Kramer (not Michael Kremer – quoted in this book on p74), published by Books on Tape (6 CDs). Kramer does a good job except when he tries an Australian or British accent.

* For an excellently written description of evidence-based medicine and more, read Atul Gawande’s Better: A Surgeon’s Notes on Performance.

** One of the most striking findings comes from the meta-analysis (1996) of two psychologists, Meehl & Grove, who look at 136 studies comparing human judgment to equation-based judgment. In only 8 of the 136 studies was expert prediction found to be appreciably more accurate than statistical prediction.” Overall, experts got the predictions right 66% of the time whereas Super Crunchers got them right 73% of the time. And the 8 in which experts did better weren’t concentrated in any particular field. From looking at the paper myself, I found that 64 of the studies favored the Super Crunchers whereas 64 found the two methods roughly equal. Noteworthy. [In the book, p111 and p232; or just read the original paper at here.]